Here you can learn more about beautiful Paxos. The best beaches, history, culture and all are easily accessible from the Villa Adriana.

"The setting of the villa was just perfect for us….a daily walk to a mainly deserted beach for a swim and an evening walk into Lakka to our customary seat at the waters edge for a glass of wine or two. Our stay did not feel like a normal holiday, we felt we were living there and had become part of the local community, it was very hard for us to leave." Steve & Angela

The nearest beaches to our house are in Lakka Bay, an 8 minute walk down through the village to Harami beach. 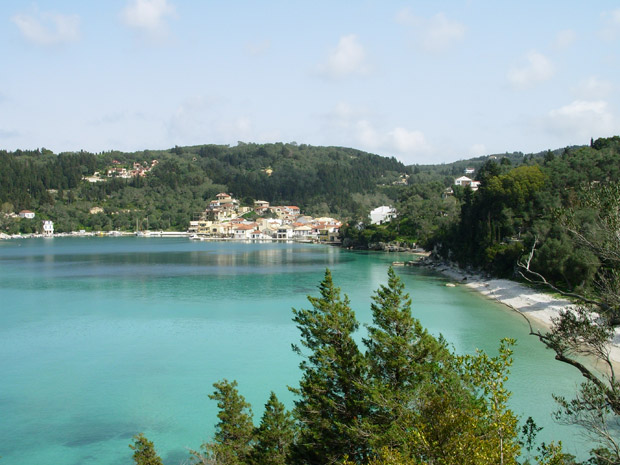 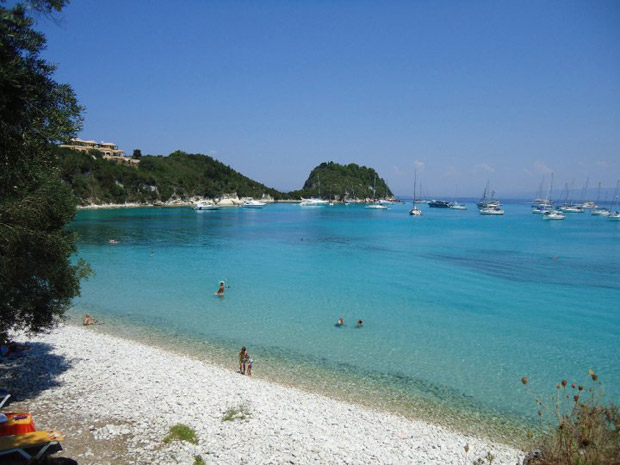 In the opposite direction, the secluded Orkos Beach, a 10 minute walk down a rocky path through the trees. Other excellent beaches further down the coast from Orkos are best reached by hiring a small boat with outboard motor. Our guests also have free access to the large swimming pool of a hotel, a 2 minute walk down the path. 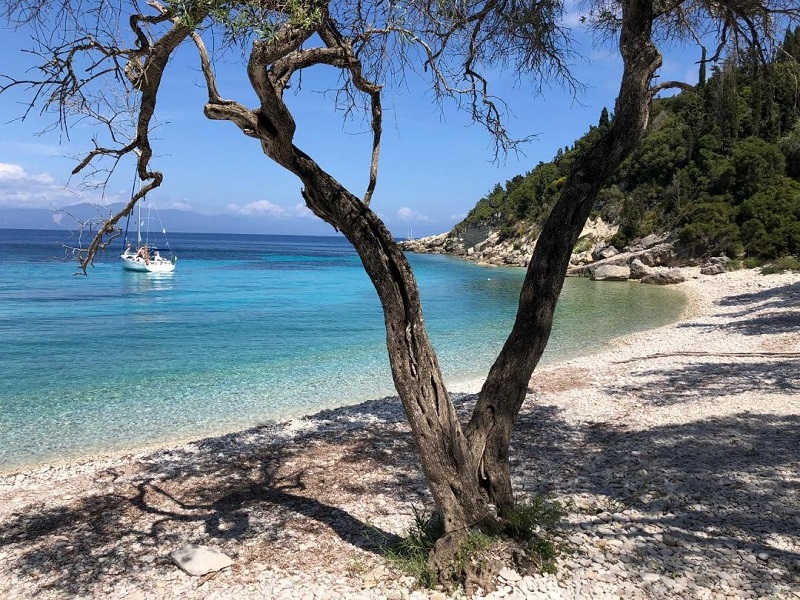 For a sandy beach with crystal clear water, nothing beats the nearby tiny island of Anti-Paxos. Boats leave throughout the day from in front of the main square in Gaios. There is a regular bus service between Lakka and Gaios. 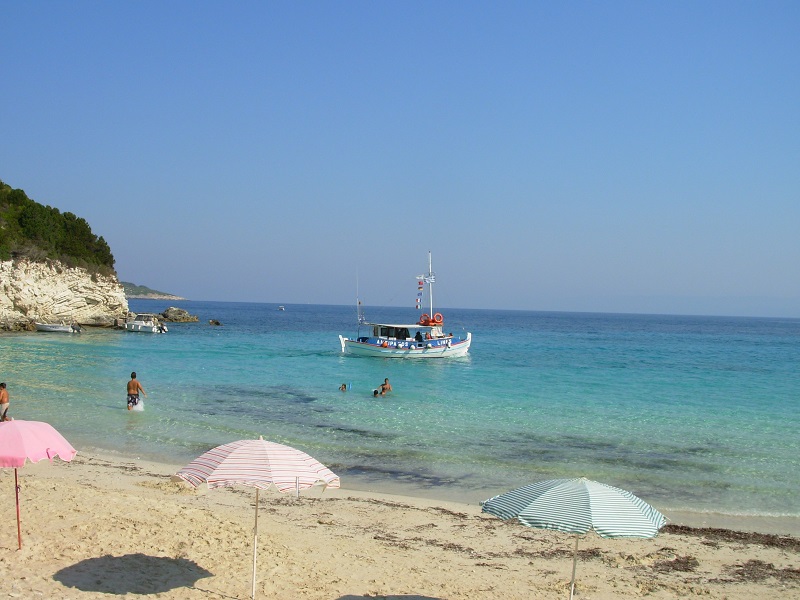 Our house is also ideally situated as a starting point for interesting walks to both sides of the island.

Your best guide is the lovely, eccentric Bleasdale Walking Guide to Paxos, which also has the best map of the island. Our house is on it. You can buy a copy in the village shops. It's also full of information about the island with recommended walks. And if you wish, you can also arrange guided walks.

Small motorboats can be hired by the day or week, as can motor bikes and cars. Yoga lessons are available on the island. And Lakka has its own diving school, if you’d like to book lessons. 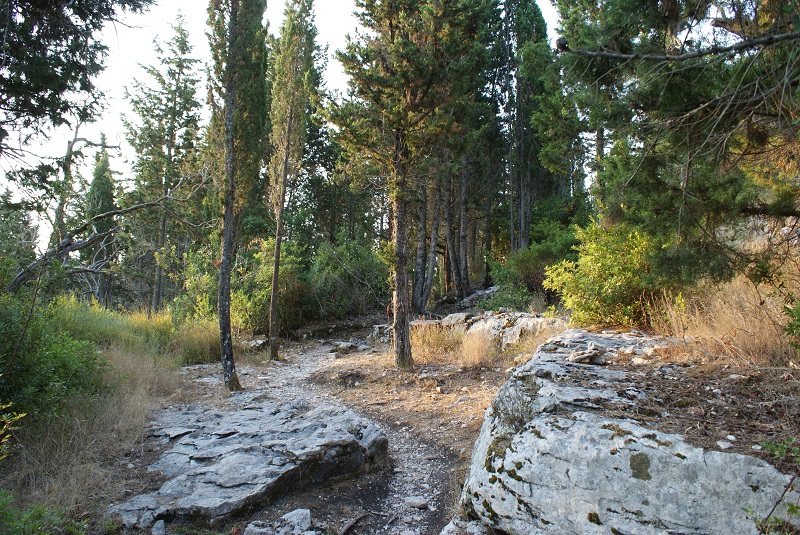 Pretty Lakka village harbour frames an almost perfect circular bay. Quiet in the day time, very lively in the evening when, with its 15 tavernas and bars, it becomes one big outdoor dining room, where cars and motorbikes are banned. 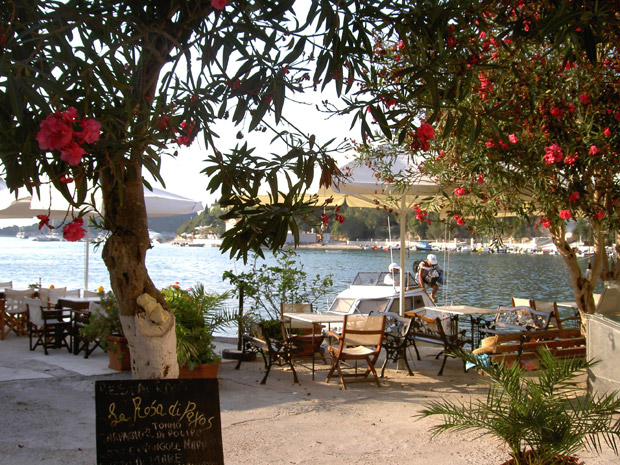 The food is better and more varied than on many other Greek islands. It ranges from the Greek family restaurant, Nionios, where you are invited into the kitchen to choose your food, to the bustle of the Diogenis Taverna with its excellent traditional dishes. In the daytime you can enjoy a cappuccino on Akis' waterside terrace while watching the yachts coming in to anchor, or at the kafenion (traditional café) in the main square where the village elders meet to gossip and play backgammon.

The village has two small supermarkets with mouth-watering Mediterranean fruit and vegetables, two bakers, who do very good apple pies and spinach pies as well as different types of bread, and an excellent butcher with ready-made chicken souvlaki's for your barbecue. And Ilias makes the best Italian ice cream on the island. On the western side of the island are its famous, spectacular cliff formations with sea caves. According to the legend, Poseidon, God of the Sea, created Paxos with a blow of his trident, to create a hiding place for his mistress.

Other legends say that Paxos was in fact Circe's island of Homer's Odyssey, the place where the sorceress turned the hero's sailors into pigs. But fortunately she changed her mind, turned the crew back into humans and gave Odysseus directions home. Cleopatra and Mark Antony also seemed to have stayed on Paxos - to rest for a few days after the nearby sea battle of Actium.

It's still the ideal place to relax . 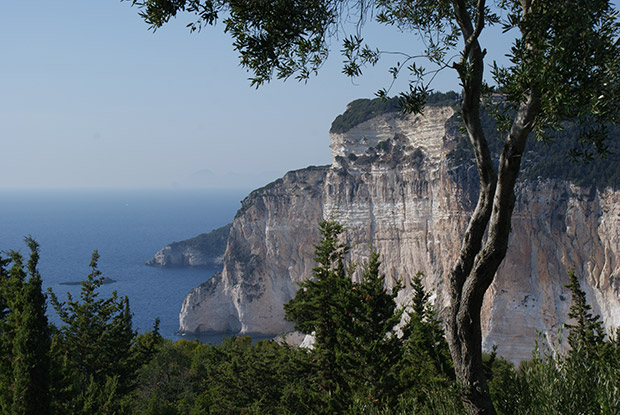 The unspoiled character of Paxos has attracted many famous artists and actors over the years, including Laurence Olivier, Joan Plowright, Rex Harrison, Albert Finney and Harold Pinter. The actor Peter Bull (Tom Jones, Dr. Strangelove) wrote an amusing book, It Isn’t All Greek to Me, about his experiences as the first foreign home-owner on the island. In fact, numerous books have been written here, and you may spot well known faces at the small taverna tables, attracted by the informal, unpretentious atmosphere of the island. Gerald Durrell, writer of My Family and Other Animals, late in life said that Paxos reminded him of Corfu when he was a boy. Lakka's beautiful small Greek Orthodox church is one of the oldest of 65 on the island serving the 2,000 permanent inhabitants. The island also boasts its own brass band, which parades in its exotic uniform on ceremonial occasions and at Easter. There is even a local amateur theatre company, which produces a play each year around Easter time. In September there is an international music festival with concerts at various locations on the island. Many of the cultural events are arranged and promoted by The Friends of Paxos.

Highlighting the location of Villa Adriana and Studio. 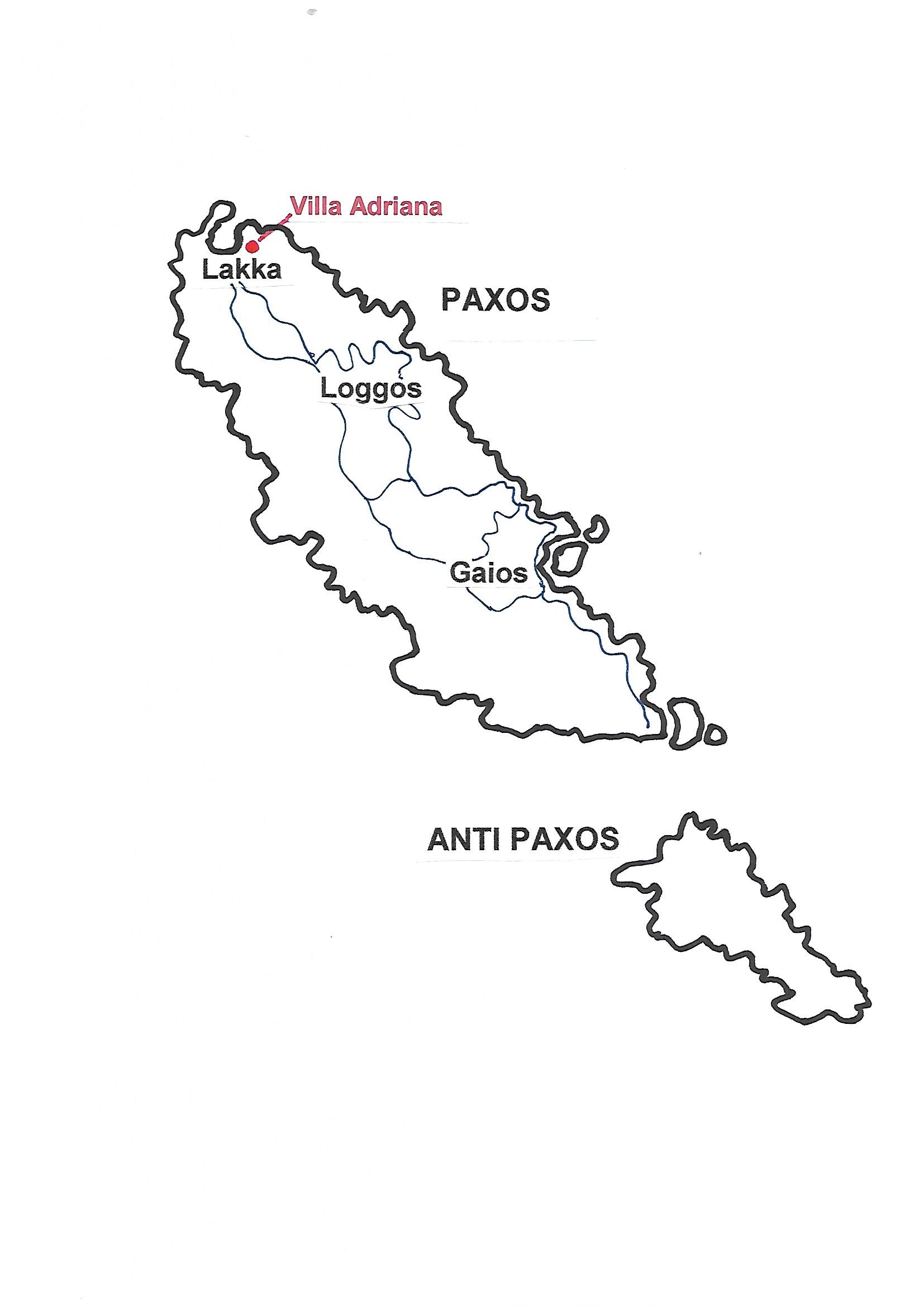 Romantic traditional villa and studio in a large private olive grove. The villa has stunning sea views and the studio opens onto the beautiful garden. Very private and quiet, yet 5 mins walk to the seaside village and 8 mins walk to the local beaches.

To make a booking, or for more information.

“Wonderful villa, beautifully finished with outdoor areas to die for! The setting is one of absolute peace and tranquillity, and the sunset from the pagoda is breathtaking. We feel very relaxed and that we have been here for months, not just two weeks." Emily & Colin